I just got done switching the handling of mathematical notation in the blog from LaTeXMathML to MathJax. I think it may be a bit easier for me to use as an author, and the fonts seem to render faster in Firefox.  The main reason for the switch, though, is that statistics Google compiled on my site visitors showed 69% of viewers using Windows but only 25% using Internet Explorer.  I'd like to interpret that as a sign that readers of this blog have above average intelligence (or at least common sense), but it occurred to me that the fact that IE users needed a plug-in to see the mathematical notation in some posts might have been a deterrent.  Not wanting to scare anyone away, I switched to MathJax, which I believe will work on a copy of IE that lacks the plug-in (and thus cannot display MathML natively) by switching to web-based fonts automatically.  I'm writing this in Firefox (on a Mint laptop that lacks a copy of IE), so testing will have to wait until my next foray in Windows.
Posted by Paul A. Rubin at 12:27 AM 7 comments

Backing Up My Blog

I just spent an hour or so searching for options to print Blogger entries (printing just the blog entry itself, not all the widgets and other clutter) and/or back up the content.  Ideally, I'd hoped to add a "print this" widget, but apparently none exists, and the best solution I found (which involved adding custom code to the template) didn't work for me because I couldn't figure out the right IDs to use for the bits I wanted to make vanish.  There's still the browser print feature, but that gets you all sorts of things you probably don't want.

On the backup issue, I had better luck.  There are various options for (essentially) spidering the site and storing pages, including the ScrapBook extension for Firefox (which I already use for other purposes).  In my case, I found a simpler option.  The key is that I already have source documents for any images I use (because I have to create them myself).  For lengthier posts, particularly those with lots of math, I sometimes compose the post in LyX and transfer it to Blogger, which means the LyX document serves as a backup.  So my main need is to back up just the text itself (with or without all the extra clutter), primarily for the posts that I create directly in Blogger's editor (such as this one).

Enter the DownThemAll! extension for Firefox.  Once you've installed it, the process is pretty simple:
Need to back up images (or other media files) as well?  So far, the best way I've found is to open the actual blog post and download them (by right-clicking individual images or using DownThemAll! again).  Note that the links in your downloaded copies of the HTML file still point to the Blogger server, so you can open the downloaded copy to get to media files; you do not need to actually navigate to it on Blogger.

If there's a better way to do this (and particularly if there's a simply way to print just what's in the actual post), I'd love to hear it.
Posted by Paul A. Rubin at 5:50 PM 0 comments

How to handle a piecewise-linear function of one variable in an optimization model depends to a large extent on whether it represents an economy of scale, a diseconomy of scale, or neither. The concepts apply generally, but in this post I'll stick to cost functions (where smaller is better, unless you are the federal government) for examples; application to things like productivity measures (where more is better) requires some obvious and straightforward adjustments. Also, I'll stick to continuous functions today. 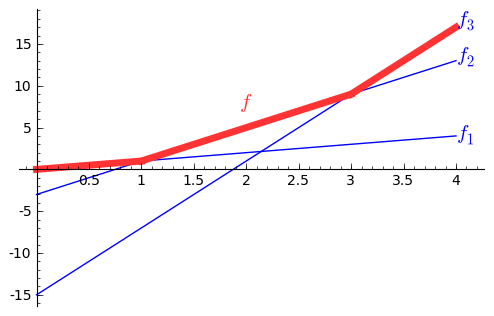 Letting $f_{i}(x)=a_{i}+b_{i}x$, we can see from the graph that $f$ is just the upper envelope of the set of functions $\{f_{1},\ldots,f_{N}\}$ (easily verified algebraically). To incorporate $f(x)$ in a mathematical program, we introduce a new variable $z$ to act as a surrogate for $f(x)$, and add the constraints\[z\ge a_{i}+b_{i}x\;\forall i\in\{1,\ldots,N\}\] to the model. Anywhere we would use $f(x)$, we use $z$ instead. Typically $f(x)$ is either directly minimized in the objective or indirectly minimized (due to its influence on other objective terms),
and so the optimal solution will contain the minimum possible value of $z$ consistent with the added constraints. In other words, one of the constraints defining $z$ will be binding. On rare occasions this will not hold (for instance, cost is relevant only in satisfying a budget, and the budget limit is quite liberal). In such circumstances, the optimal solution may have $z>f(x)$, but that will not cause an incorrect choice of $x$, and the value of $z$ can be manually adjusted to $f(x)$ after the fact.


Now let's consider an economy of scale, such as might occur when $x$ is a quantity of materials purchases, $f(x)$ is the total purchase cost, and the vendor offers discounts for larger purchases. The marginal rate of change of $f$ is now nonincreasing as a function of $x$, and as a result $f$ is concave, as in the next graph. 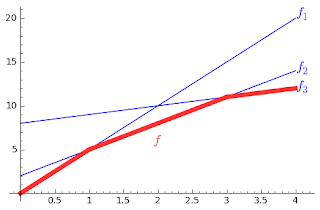 Generally speaking, if $x$ and $y$ are variables in a mathematical program, and you want to deal with their product $z=x y$, you will end up having a quadratic problem (which may create problems with convexity if the quadratic terms appear in constraints). There is a special case, though, when at least one of $x$ and $y$ is binary, and when the other variable is bounded. Under those assumptions, the product can be linearized.