Across the street from the Charlotte (NC) Convention Center, site of the recent INFORMS conference, is a small park/shopping area that I think is known as "The Green". It contains a bit of statuary and some rather amusing "street signs" that I thought were worth remembering. In no particular order (and demonstrating no photographic skill whatsoever), here are some shots I snapped with my tablet's camera.

These two sculptures flank the entrance to the park: 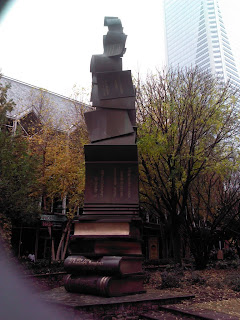 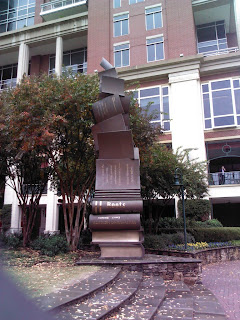 (Sorry about the largely illegible engraving; the sun deserted me in my hour of need.) Toward the middle of the park, we have this somewhat curious choice: 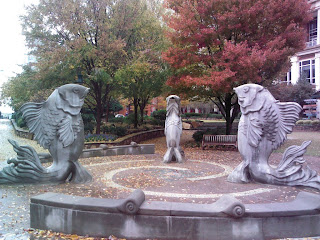 I'm not sure what (if anything) they have to do with literature, and I could swear they were extras in an episode of Voyage to the Bottom of the Sea (a major contributor to my aversion to fish in restaurants).

Now for the lamp posts: 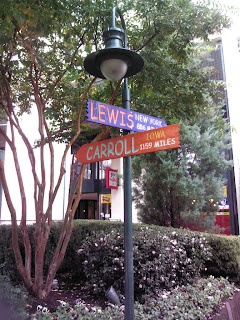 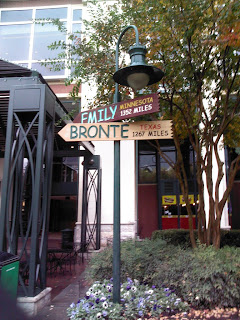 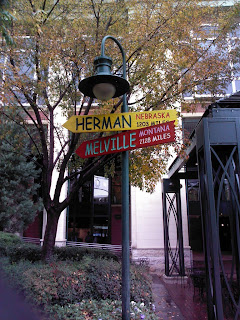 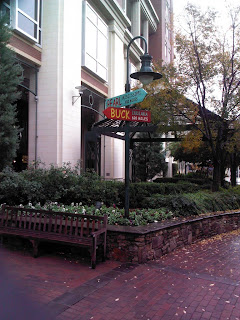 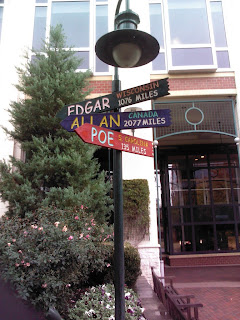 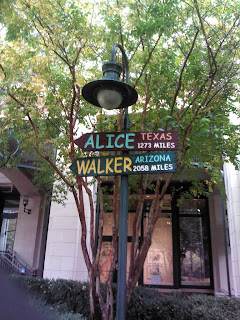 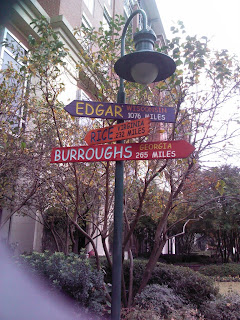 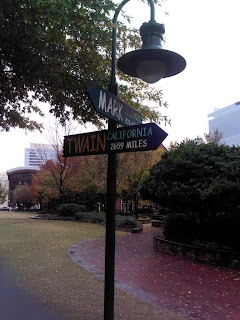 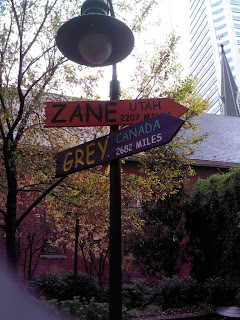 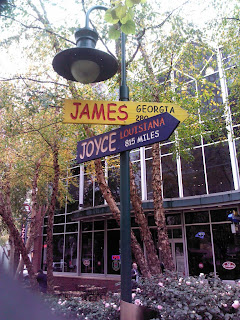 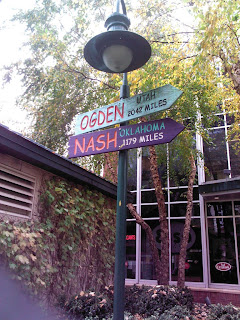 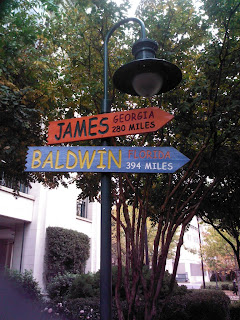 There was one other signpost, which I did not shoot because no angle did it justice. It had a half dozen or so signs pointing to other cities and towns named "Charlotte" (including Michigan's Charlotte, mispronounced "shar-LOT" by the locals). I have to wonder whether having a sign already devoted to the name "Charlotte" is why Charlotte Bronte did not earn a lamp post. (Alternate theories: Texas has the only town named "Bronte" in the U.S.; or Emily's shade bribed someone to one-up her sister.)
Posted by Paul A. Rubin at 5:32 PM 2 comments

I recently acquired a Toshiba Thrive tablet (Android Honeycomb, currently version 3.2.1), in part because it comes with two USB ports (one full size, one mini).  The USB ports theoretically allow me to move files between my Ubuntu PC and the tablet by mounting the tablet as a disk drive on the PC.  I say "theoretically" because Google recently moved to Media Transfer Protocol for handling connections over USB. This seems to be okay for Windows PCs and Macs, but for Ubuntu (and other Linux systems) it requires using the mtpfs package. I've found connections to be excruciating slow, and for some reason (probably a setting I'm missing), when I do get connected, all I see is an empty root and an empty Playlists subdirectory. Trust me, there are tons of files on the Thrive.

Fortunately, I found WebSharingLite File/Media Sync, a free app in the Android Market. (As one might expect from the "Lite" part, there is a paid version, rather economically priced.) I have a WiFi DSL gateway at home (and of course my laptop has WiFi). Running WebSharingLite on the tablet, I can connect via a web browser from my PC or laptop and upload/download files considerably faster than what mtpfs over USB seems to allow. (Again, though, I should stress that there's no guarantee I'm setting up mtpfs correctly, despite hours of poking around the web looking for help.) The connection requires a password; coupled with the fact that it's on a nonroutable segment, behind the firewall in my gateway, I think the security is adequate.

I can definitely recommend WebSharingLite.
Posted by Paul A. Rubin at 6:53 PM 1 comments

Back to Back Conferences

I'm back from two conferences in consecutive weeks: INFORMS (Charlotte NC) and DSI (Boston). (The link to the DSI meeting is a bit ephemeral -- it will eventually point to the 2012 meeting.) Two conferences in two weeks is a bit hard on both the waistline and the brain.  I have a few odds and ends to share.

Repeating something I posted on the INFORMS conference blog, I found out from Peter Horner (editor of Analytics Magazine) that a recent change in the magazine’s URL (from analytics-magazine.com to analytics-magazine.org) may have broken some people’s RSS subscriptions to the web site, as well as screwing up the site's Google ranking. If you subscribe to the magazine's RSS feed, you might want to test the feed and resubscribe if necessary. If you're unfamiliar with the magazine, it is worth taking a look (and, if you choose, using the RSS button at the lower left to subscribe). For readers of this blog who are active on social networks, please help spread the word.

Changing gears, in a previous post  I wrote about PowerPoint users suffering from invisible math formulas when they ran their presentations on someone else's laptop at a conference. Out of curiosity, I made a list at the INFORMS meeting of how many presenters I saw using different types of software. My classification system was a bit fuzzy.  Beamer presentations tend to be distinctive, but PowerPoint presentations are not as obviously PowerPoint unless you see the presenter launching them from the PowerPoint program. Similarly, the only ways I have to determine that a presentation was done in Keynote (Apple's presentation software) are if it contains tons of eye candy, or it is being played from an MOV file, or if I see the presenter using a Mac. Besides Beamer, there are several other ways to produce presentations in LaTeX (including FoilTeX and Powerdot), and I don't know how to tell the end products of those apart. So my classification systems was Beamer, PowerPoint, Keynote or "Other" (where "Other" could include any misclassified presentations).

As it turns out, I did not see any presentations that I could detect were done in Keynote. (I think Tim Hopper might have used it for his portion of our panel session on social media, but I had my back to the screen when he was presenting.) My final count was 24 Beamer files, 9 PowerPoint files and 8 "Other" files.

I came away with two conclusions. The first is that PowerPoint may be losing market share among the INFORMS crowd, since a few years ago my informal survey had an even split between Beamer and PowerPoint. Then again, this may reflect a decrease in the number of US presenters at INFORMS, since LaTeX (and Beamer) seem to be more popular among European and possibly Asian users than among Americans. PowerPoint was pretty ubiquitous at the DSI meeting (which is populated mainly with business school faculty and doctoral students). The second conclusion is that either PowerPoint has gotten better or people have gotten better at using it: there were no missing formulas in any of the papers I saw presented.
Posted by Paul A. Rubin at 9:29 AM 5 comments

I volunteered to be a guest blogger at the 2011 INFORMS national meeting in Charlotte, NC. I haven't even hopped a plane yet, and I've already spammed the blog (er, posted) once. You can find the post, if you're curious, at http://meetings2.informs.org/charlotte2011/blog/?p=145.  There is quite a cast of bloggers for the meeting, so if you are attending (or just interested), I recommend subscribing to the RSS feed.
Posted by Paul A. Rubin at 5:00 PM 0 comments

Today I was suddenly unable to use my home HP ink jet printer with Linux Mint, despite the fact that this morning it was printing fine from Windows (my system is dual-boot).  The error message informed me that /usr/lib/cups/backend/hp had failed for unspecified reasons.  Toggling the printer off and back on did not help, nor did rebooting the system, nor did switching the driver.

A quick web search, however, revealed the fact that some unspecified update had screwed up permissions on the /usr/lib/cups/backend directory (restricting it to root only).  Most of the executables in that directory looked okay, but the permissions for cups-pdf were also root only, so I'm guessing that it was an update to cups-pdf that blew things up.

I thought Microsoft had a patent on destructive updates.  Guess not.
Posted by Paul A. Rubin at 2:55 PM 0 comments