In yesterday's post, I described a simple multiple-criterion decision problem (binary decisions, no constraints), and suggested a possible way to identify a portion of the Pareto frontier using what amounts to guesswork: randomly generate weights; use them to combine the multiple criteria into a single objective function; optimize that (trivial); repeat ad nauseam.

I ran an experiment, just to see whether the idea was a complete dud or not. Before getting into the results, I should manage expectations a bit. Specifically, while it's theoretically possible in some cases that you might find all the Pareto efficient solutions (and is in fact guaranteed if there is only one), in general you should not bank on it. Here's a trivial case that demonstrates that it may be impossible to find them all using my proposed technique. Suppose we have three yes-no decisions ($N=3$, using the notation from yesterday's post) and two criteria ($M=2$), one to be maximized and one to be minimized. Supposed further that, after changing the sign of the second criterion (so that we are maximizing both) and scaling, that all three decisions produce identical criterion values of $(1,-1)$. With $N=3$, there are $2^3=8$ candidate solutions. One (do nothing) produces the result $(0,0)$. Three (do just one thing) produce $(1,-1)$, three (do any two things) produce $(2,-2)$ and one (do all three things) produces $(3,-3)$. All of those are Pareto efficient! However, if we form a weighted combination using weights $(\alpha_1, \alpha_2) \gg 0$ for the criteria, then every decision has the same net impact $\beta = \alpha_1 - \alpha_2$. If $\beta > 0$, the only solution that optimizes the composite function is $x=(1,1,1)$ with value $3\beta$. If $\beta<0$, the only solution that optimizes the composite function is $x=(0,0,0)$ with value $0$. The other six solutions, while Pareto efficient, cannot be found my way.

With that said, I ran a single test using $N=10$ and $M=5$, with randomly generated criterion values. One test like this is not conclusive for all sorts of reasons (including but not limited to the fact that I made the five criteria statistically independent of each other). You can see (and try to reproduce) my work in an R notebook hosted on my web site. The code is embedded in the notebook, and you can extract it easily. Fair warning: it's pretty slow. In particular, I enumerated all the Pareto efficient solutions among the $2^{10} = 1,024$ possible solutions, which took about five minutes on my PC. I then tried one million random weight combinations, which took about four and a half minutes.

Correction: After I rejiggered the code, generating a million random trials took only 5.8 seconds. The bulk of that 4.5 minutes was apparently spent keeping track of how often each solution appeared among the one million results ... and even that dropped to a second or so after I tightened up the code.

To summarize the results, there were 623 Pareto efficient solutions out of the population of 1,024. The random guessing strategy only found 126 of them. It found the heck out of some of them: the maximum number of times the same solution was identified was 203,690! (I guess that one stuck out like a sore thumb.) Finding 126 out of 623 may not sound too good, but bear in mind the idea is to present a decision maker with a reasonable selection of Pareto efficient solutions. I'm not sure how many decision makers would want to see even 126 choices.

A key question is whether the solutions found by the random heuristic are representative of the Pareto frontier. Presented below are scatter plots of four pairs of criteria, showing all the Pareto efficient solutions color-coded according to whether or not they were identified by the heuristic. (You can see higher resolution versions by clicking on the link above to the notebook, which will open in your browser.) In all cases, the upper right corner would be ideal. Are the identified points a representative sample of all the Pareto efficient points? I'll let you judge. 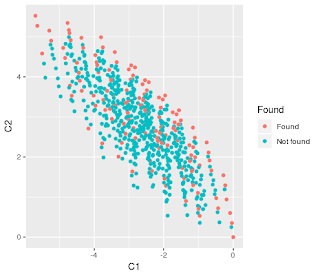 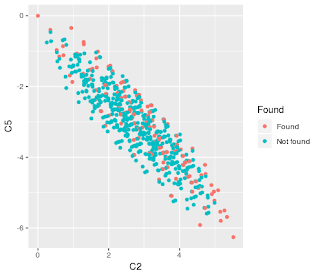 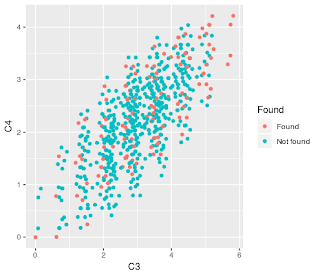 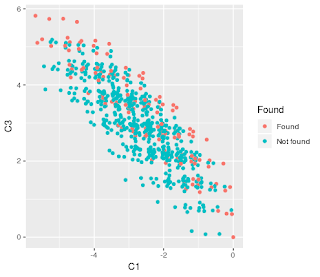 I'll offer one final thought. The weight vectors are drawn uniformly over a unit hypercube of dimension $M$, and the frequency with which each identified Pareto solution occurs within the sample should be proportional to the volume of the region within that hypercube containing weights favoring that solution. So high frequency solutions have those high frequencies because wider ranges of weights favor them. Perhaps that makes them solutions that are more likely to appeal to decision makers than their low frequency (or undiscovered) counterparts?
Posted by Paul A. Rubin at 6:29 PM 2 comments

One of the challenges of multiple-criteria decision-making (MCDM) is that, in the absence of a definitive weighting or prioritization of criteria, you cannot talk meaningfully about a "best" solution. (Optimization geeks such as myself tend to find that a major turn-off.) Instead, it is common to focus on Pareto efficient solutions. We can say that one solution A dominates another solution B if A does at least as well as B on all criteria and better than B on at least one criterion. A solution is Pareto efficient if no solution dominates it.

Recently I was chatting with a woman about a multiple-criteria model she had. The variables were all binary (yes-no decisions) and were otherwise unconstrained. Normally my hackles would go up at an unconstrained decision problem, but in this case all constraints were "soft". For example, rather than specify a fixed budget, she would make cost one of the criteria (less being better) and let the decision maker screen out Pareto efficient solutions with unrealistic budgets.

I won't name the researcher or go into more details, since her work is currently under review (as of this writing), but I will look at a similar problem that is only slightly simpler. Namely, I will add the requirement that the criteria are additive, meaning that the value of any criterion for any "yes" does not depend on which other decisions wound up "yes" rather than "no". So, in mathematical terms, we have $N$ binary decisions ($x\in\{0,1\}^N$) and $M$ criteria. Let $c_{ij}$ denote the value of criterion $j$ when $x_i=1$. In what follows, I will want to be consistent in maximizing (rather than minimizing) criterion values, so I'll assume that (a) a "no" decision has value 0 for every criterion and (b) criteria are normalized so that $c_{ij}\in [0,1]$ for all $i$ and for all $j$ such that more is better, while $c_{ij}\in [-1,0]$ for all $i$ and for all $j$ such that (before scaling) less is better. For example, if cost is a criterion (and if you do not work for the Pentagon), the scaled values of cost will run from -1 for the most expensive choice encountered to 0 for any choice that is free.

The solution space contains $2^N$ candidate solutions, which means that enumerating them is out of the question for nontrivial values of $N$ (and, trust me, hers are nontrivial ... very, very nontrivial). In any case, the size of the Pareto frontier when $N$ is nontrivial will quickly outpace any decision maker's capacity (or patience). So it seems reasonable to sample the Pareto frontier and present the solution maker with a reasonably (but not excessively) large set of Pareto efficient solutions that hopefully is representative of the overall Pareto frontier.

There are methods for doing this, and the researcher pointed me toward one: the NSGA-II genetic algorithm [1]. Like any genetic algorithm, NSGA-II runs until you stop it via some limit (run time, number of generations, some measure of stagnation, ...). As I understand it, the final population of solutions are not guaranteed to be Pareto efficient, but the population converges in some sense to the Pareto frontier. That would likely be sufficient in practice, and the researcher had good luck with it initially, but ran into scaling problems as $N$ grew.

Looking at the problem reminded me of a sometimes troubling dichotomy faced by academics (in at least some disciplines, including operations research). On the one hand, real-world decision makers with real-world problems are often quite happy to get solutions that are obtained quickly and cheaply and are easily explained or understood, even if the technology is "primitive". Academics, on the other hand, usually need to publish their research. In the domain of the problem, low-tech algorithms may be perfectly fine (and easier to understand than more esoteric algorithms), but for a professor in IE or OR looking to publish in a journal in his or her field, "simple" usually means "too unsophisticated to publish". Thus we tend at times to "over-engineer" solutions.

It's trivial to show that, so long as none of the composite weights $w_i(\alpha)$ is 0, each $x$ found by optimizing some $f_\alpha$ must be Pareto efficient. So we can generate a sample of Pareto efficient solutions fairly efficiently ... maybe. I did deal one card off the bottom of the deck. Solutions will tend to repeat, so we will need to do some bookkeeping to ensure that, in the final results, duplicates are weeded out. That means comparing each new solution to its predecessors. Each comparison is $O(N)$, and if we assume that we only retain a "reasonable" number of alternatives (a number that does not grow with $N$) in order to avoid causing the decision maker's brain to explode, then time spent weeding duplicates should be $O(N)$. Overall, the load is $O(NR)$, where $R$ is the number of replications performed.

That left me with a few questions, the main one being this: for plausible sample sizes, how well does the set of solutions obtained represent the Pareto frontier? Is it "biased" in the sense that solutions cluster on one part of the frontier while missing other parts?

I'll show some experimental results in my next post, and let you decide.

I've been poking around in R with an unconstrained optimization problem involving binary decision variables. (Trust me, it's not as trivial as it sounds.) I wanted to explore the entire solution space. Assuming $n$ binary decisions, this means looking at the set $\{0,1\}^n$, which contains $2^n$ 0-1 vectors of dimension $n$.

For reasons I won't get into, I wanted to associate each vector with an ID number from 0 to $2^n-1$, which sounds pretty straightforward ... until you try to do it. I thought I'd post my code here, with no warranty ("express or implied", as the legal eagles would say) that it's computationally efficient.

Before I explain the code, let me just point out that using an integer from 0 to $2^n-1$ implies that $n$ is small enough that $2^n-1$ fits in a machine integer. So if you decide to try the code, don't go nuts with it.


To facilitate converting binary vectors to integers, I store all the powers of 2 once. The fromID() function takes an integer ID number and converts it to a binary vector of length $n$. It uses the intToBits() function from the R base package, which does the heavy lifting but whose output needs a little massaging. The toID() function takes a binary vector and converts it to an integer ID number. So, with $n=5$, the output of fromID(22) is
while the output of toID(c(0, 1, 1, 0, 1)) is
(as you would expect).