Patricia Randall just published a blog post, "Piecewise Linear Objective Functions in Mathematical Models", in which she mentions using (or trying to use) the support for piecewise linear functions built into CPLEX APIs. (There's also a rather groan-worthy mathematical pun at the end of the post, in case you want to abuse yourself.)  I've talked about piecewise linear functions before (links below), and I'll try not to repeat myself too much. I'm aware of the function Patricia refers to (in the Java API, it is IloMPModeler.piecewiseLinear(), and is overloaded several ways). I've never used it, though.

From a modeling perspective, not all piecewise linear functions are created equal. In particular, those that induce an economy of scale require the use of binary variables (or modified branching logic in a MIP, or some other trick) to implement, whereas those that induce a diseconomy of scale can be converted into sets of linear constraints. Cutting to the chase scene, if your model would otherwise be a linear program, sometimes piecewise linear functions turn it into a MILP and sometimes they don't.

As I read Patricia's piece, I got curious whether the implementation of  IloMPModeler.piecewiseLinear() included a check for whether binary variables were needed (which is easy in some specific contexts but could be hard in the general case), or whether it always used binary variables. So I created a little test case, and based on that test case, it appears the latter is true.

The test case is a continuous knapsack problem (maximization) where the value (objective contribution) of each item is a concave piecewise linear function with three segments (two breakpoints). The value of a typical item might look like 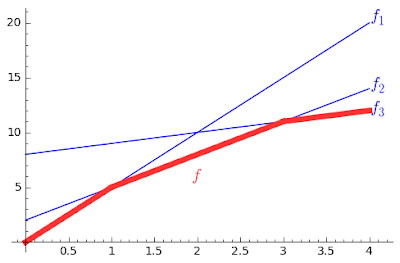 where $f_1,f_2,f_3$ are linear functions that extrapolate the three segments of the value function $f$.

Is this a matter of concern? I'm not positive, but I'm inclined not to think so, or at least not too much. CPLEX solved the MILP model ($n=50$ items) at the root node, and I suspect this is not a coincidence -- I'm pretty sure the LP relaxation of the MILP will push the binary variables in the desired direction. There is a size difference, though, as shown in the following table: